Elon Musk and Tesla: A Case Study on Growth Stocks and Idiosyncratic Risk

Mark R. Gordon — JD, MPP, CFP®, CFA
Chief Investment Officer
Investing involves risk. When most people think of investment risk, they tend to think of “market risk”: the risk that broad economic factors will impact stock markets. Not surprisingly, that’s also what we tend to focus on in our writings, e.g., changes in interest rates, trade agreements (or disagreements), government spending, and tax policy. Any or all of these elements can shed light on the question most frequently asked by commenters and clients: “What’s going on in the markets?”

Today, however, we’d like to focus on a different kind of risk: idiosyncratic risk. Idiosyncratic risk, or firm-specific risk, means an event that impacts a single company. A classic example is whether the FDA will approve a new drug. The approval (or rejection) can make or break a biotech company, but has little or no impact on other companies, sectors, or countries.

Case Study: Tesla, Inc.
We’ll take as a case study Tesla, Incorporated (“Tesla”) and its founder and CEO Elon Musk. We believe the recent story of Tesla and Musk provides (1) a striking example of idiosyncratic risk; (2) insight as to why relatively small events today can impact stock prices, especially for growth stocks; and (3) a reminder why we diversify our investment portfolios.

Tesla is a Palo Alto-based company that manufactures and sells electric vehicles1. Tesla and its cars have been generating buzz and headlines since at least 2013, when Motor Trend magazine named Tesla’s Model S sedan its “Car of the Year.”

Tesla is a Growth Stock
Behind the fanfare, Tesla sells relatively few cars compared to the larger, more established auto companies. Last year, Tesla sold about 100K vehicles2. Not bad. But that number is dwarfed by the 6.6M vehicles sold by Ford Motor Company (“Ford”) and the 10M sold by General Motors Co. (“GM”) in 2017. Moreover, Tesla reported an operating loss of about $1.6B last year. Ford and GM both reported positive operating income, roughly $7B and $10B respectively.

Tesla’s market impact is, ironically, larger than either Ford or GM. As of this writing, the value of all Tesla’s stock (its “market capitalization” or “market cap”) is just under $58B. GM currently has a market cap of $47B, and Ford’s market cap is $36.5B. How can a company sell 1% as many cars as its competitors and be that much larger?

In a word, growth. As we’ve discussed before, today’s market prices represent our “collective best guess” regarding future events. Tesla’s stock price today tells us investors believe it will grow rapidly, or at least more rapidly than Ford or GM. In other words, we’re willing to pay more today because we expect Tesla’s tomorrow will be brighter. Tesla, thus, is what investors refer to as a “growth” company.

And it has indeed grown. As the chart below shows, since its initial public offering in 2013, Tesla has risen roughly 1000% through the end of last quarter. That return is materially higher than the S&P 5003 which went up “only” 230% during that time4: 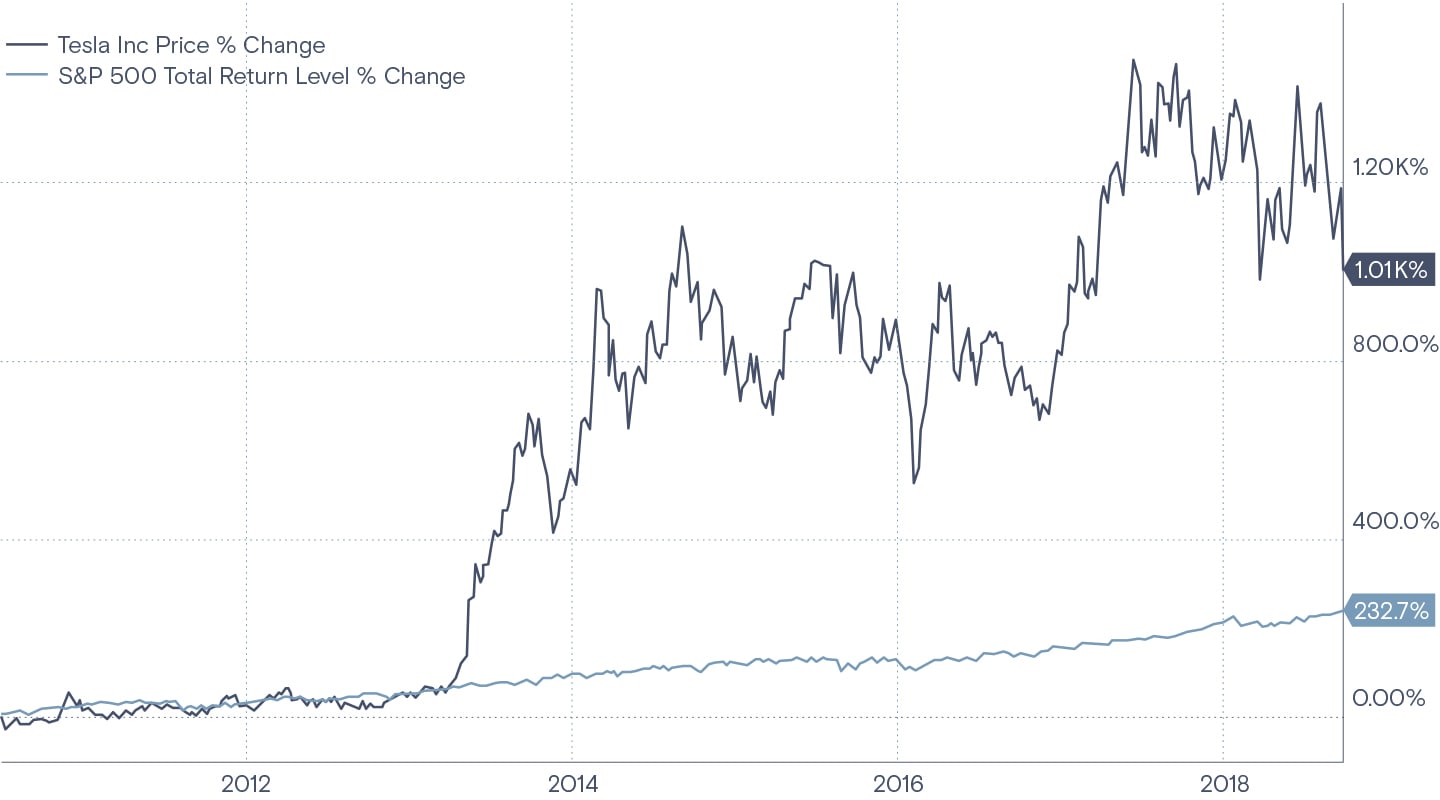 With increased expectations comes increased scrutiny. Because Tesla’s current price assumes robust growth, analysts and investors constantly look for signals to help determine whether and to what extent Tesla is likely to realize that growth. Buyers and sellers will review macro-economic factors, consumer surveys, company financials, and direct communications from the company.

A relatively new communication source is social media. Social media, unlike traditional communication lines, doesn’t necessarily have the same filters. Most people, company executives included, can send a message to the public in a matter of seconds, inadvertently (or intentionally) bypassing the company’s vetting process.

Musk and Twitter
Elon Musk is an active social-media user. He favors Twitter. Twitter is a website and application that allows people to transmit small messages (280 characters or less) known as “tweets” to the public. When someone tweets, the message immediately goes to every person following their account.

According to Twitter.com, Musk joined the social media platform in 2009. Since then, he has tweeted more than 5,000 times. Musk frequently uses his Twitter account to share his thoughts on a variety of topics, including details regarding Tesla and its operations. Currently, Musk has over 20 million followers. This year, Musk’s tweeting has raised eyebrows and created headlines, most of which are not flattering. Here we will discuss a few of the more controversial tweets.

To provide a bit of context, Tesla stock reached an all-time high last September. But from that point through the end of March of this year, the company lost nearly a third of its value: 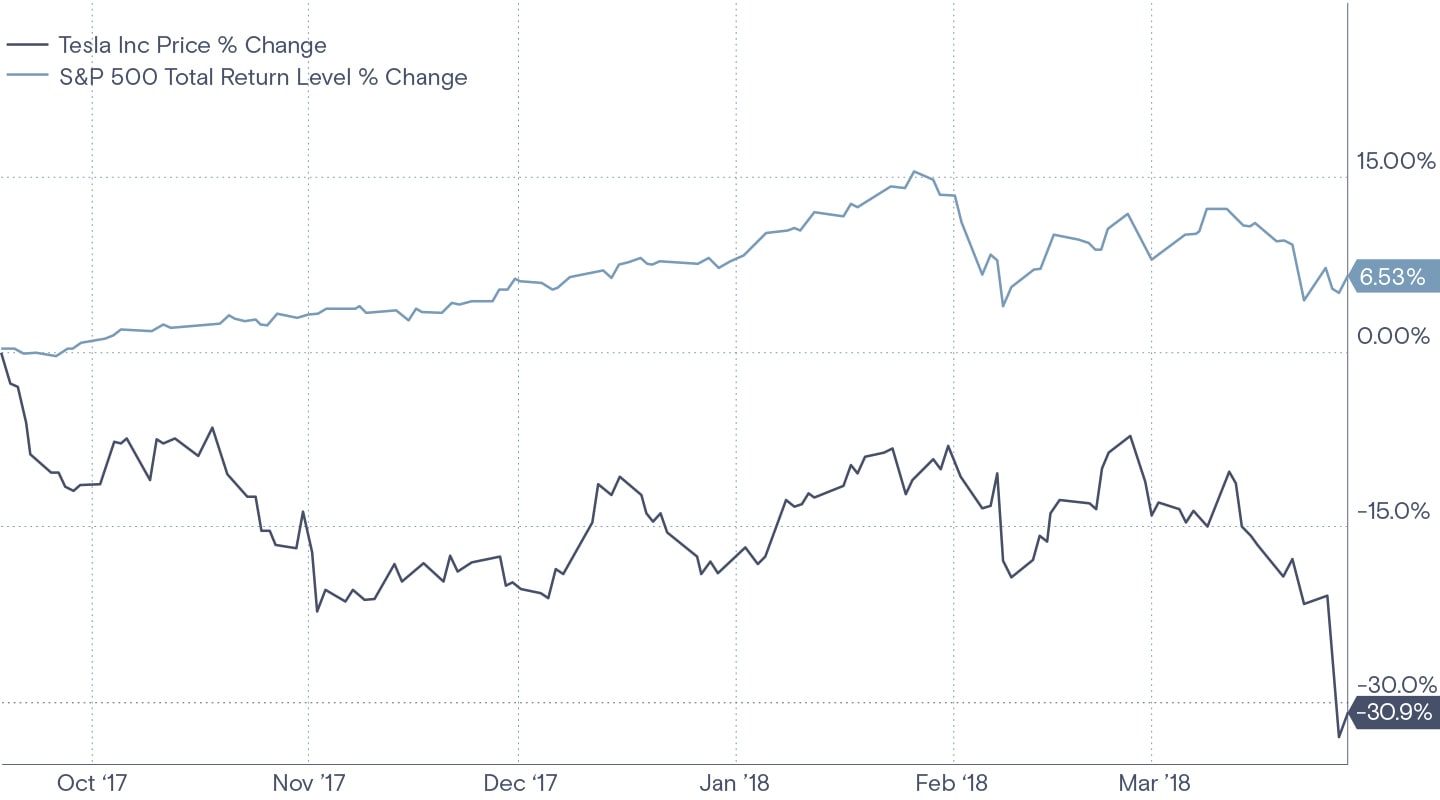 Tesla and Musk, unsurprisingly, found themselves under an increasing amount of pressure. Judging from Musk’s tweets, it’s not clear whether he was handling the stress well. In May, for example, Musk surprised many people when, out of the blue, he tweeted his desire to start a candy company:

Then I’m going to build a moat & fill it w candy. Warren B will not be able to resist investing! Berkshire Hathaway kryptonite …

It appears Musk was poking fun at Buffett’s penchant for firms with what he calls economic “moats” that may protect them in difficult times. Although many shrugged off the candy talk as some good-natured ribbing between billionaires, some investors and commentators found Musk’s Wonka-esque desires quite curious. Fortunately, the tweet didn’t impact Tesla, as the stock went up about 3% the next trading day6.

Just two months later, Musk injected himself into the middle of a high-profile cave rescue in Thailand. In late June, a Thai boys’ soccer club disappeared during a team outing. The issue captured the world’s attention when local media reported the team was trapped in a complex cave system that made rescue attempts very difficult.

Over the next week, Musk (quite generously) offered some of his engineers outside Tesla to help determine a way to get the boys out of the cave, via another tweet:

SpaceX & Boring Co engineers headed to Thailand tomorrow to see if we can be helpful to govt. There are probably many complexities that are hard to appreciate without being there in person.

Musk later designed and built what he called a “mini-sub” to rescue the boys. Thankfully, the children were ultimately rescued. But the rescue team did not use Musk’s technology. One of the members of the rescue team, a British caver, was publicly critical of Musk’s design. In response, on July 15, Musk baselessly suggested the man was a pedophile (in a now-deleted tweet):

You know what, don’t bother showing the video. We will make one of the mini-sub/pod going all the way to Cave 5 no problemo. Sorry pedo guy, you really did ask for it.

When another Twitter user pointed out Musk’s apparent accusation, Musk didn’t back down. Instead, he doubled down (in another since-deleted tweet):

The next trading day, Tesla stock lost almost 3%. By then, an increasing number of people called for Musk to stay away from Twitter and focus on his substantial duties as Chairman and CEO of Tesla.

False Claim via Tweet and the SEC
He didn’t. In fact, just a few weeks later, on August 7, Musk tweeted that he had arranged for funding to take Tesla private:

This was a bombshell announcement. The day before, Tesla stock closed just under $342. If Musk had indeed secured funding, shareholders might receive more than a 20% premium for their shares. Unsurprisingly, the stock price shot up nearly 11% that day as many investors anticipated Musk following through on his tweet.

He didn’t. In fact, on September 29, the Securities and Exchange Commission (SEC) charged Musk and Tesla with securities fraud based on the funding tweet. According to the complaint, Musk admitted he made up the fact that he had secured funding and chose the $420 per share figure because he thought his girlfriend would find the number funny due to a semi-private joke. The day after the SEC filed its complaint, Tesla stock dropped almost 14%.

Musk and the SEC quickly settled. According to the agreement, Musk and Tesla each paid a $20M penalty and Musk stepped down as Chairman of Tesla’s board. He remains CEO and a board member.

Tesla’s Volatility
From May through September of this year, Tesla has been much more volatile than the market. As you can see in the chart below, Tesla investors have had quite a roller coaster: the stock has swung between gains as high as 24% to losses as steep as 12%. Moreover, the volatility looks especially gut-wrenching compared to the S&P500 that was up over 10% over that time. 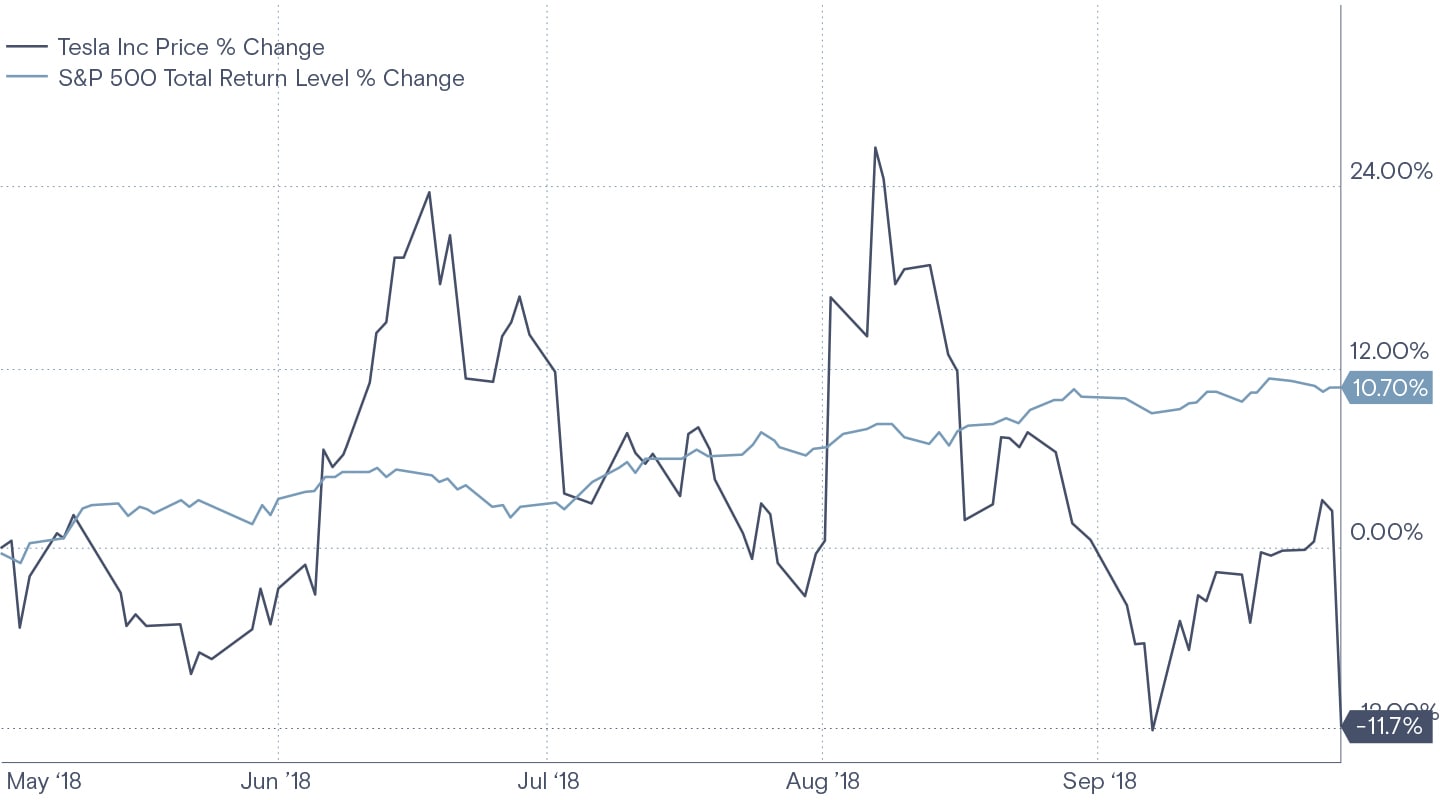 Conclusion
We don’t know what the future holds for Tesla, nor do we have an opinion about whether Tesla is likely to be a good investment going forward. Bullish investors can point to the company’s most recent earnings report and the public’s increasing demand for battery-powered vehicles. Bearish investors will note the company’s continued problems with production and increased competition in the electric-vehicle space.

That’s the case with any individual company, and the reason why small events can have a large impact on a company’s stock price. Each additional piece of information provides a bit of insight and impacts our “collective best guess” regarding the future. Our case study shows how, today, we have an increasing amount of information that can delight or spook investors. An errant tweet can have as large or larger an impact than an earnings release. That’s idiosyncratic risk.

We can’t eliminate all risk from our investments. In fact, we purposefully assume some risk to help build wealth over time. Fortunately, we can reduce idiosyncratic risk through diversification. By owning a globally diversified portfolio of hundreds or thousands of companies, we lessen the risk that any one company will decide our financial futures. Moreover, we believe diversification provides an additional benefit: freedom from headlines. Because our long-term financial plans don’t rely on the success of any one company, we can safely ignore today’s headlines – and tweets – and focus on what’s most important in each of our lives.