Mark R. Gordon — JD, MPP, CFP®, CFA
Chief Investment Officer
Most investors are happy to put 2018 behind them. To our eye, 2018 provided a dramatic rejoinder to the robust returns of 2017. That year the global equity markets, represented by the MSCI All Country World Index, rose over 20%, with emerging markets soaring over 37%.1 Last year, however, the equity markets returned some of those gains. Global equities were down about 9.5%. US stocks, represented by the S&P 500 Index, fared better than developed-foreign markets, represented by the MSCI EAFE Index, which went down 4.4% and 13.8%, respectively. Emerging markets fared the worst, dropping 14.6%.

A “Bear Cub” Market?
Although the calendar losses for the S&P 500 were relatively modest (less than 5%), investors experienced something very close to a “bear market” during the fall and winter. Analysts typically refer to a bear market as a price drop of at least 20%.2 As you can see from the attached chart, A History of Market Ups and Downs, bear markets in the US have lasted between 3 and 34 months, with an average length of about 16 months.

Last year, the S&P 500 reached an all-time high on September 20. Just over 3 months later, on December 24th, the S&P 500 had fallen more than 19%. Technically, that didn’t count as a bear market, because the index was lower by “only” 19.4%. But we believe that’s not a meaningful difference.

Bad news battered the equity markets seemingly every week. Increasing trade sanctions. Disappointing earnings. OPEC oil production cuts. Interest rate increases. A government shutdown. It felt as though each headline accompanied a gut-wrenching drop in stocks. If one paid close attention to each day’s headlines, she might think there would be no end to the descent.

But there was. At least in the short term. The very next trading day, on December 26, the S&P 500 rose almost 5%. That “Christmas Present,” as some dubbed it, was not a one-time blip. The S&P 500 finished the year almost 7% higher than the December 24 low. Moreover, as we write this, the index has risen more than 5% in the first three weeks of the new year. If we take a step back, we see that, over the last year or so, US stocks rose 10%, then went down 20%, then went up 10%3 leaving us essentially where we started at the end of 2017, as the chart below shows: 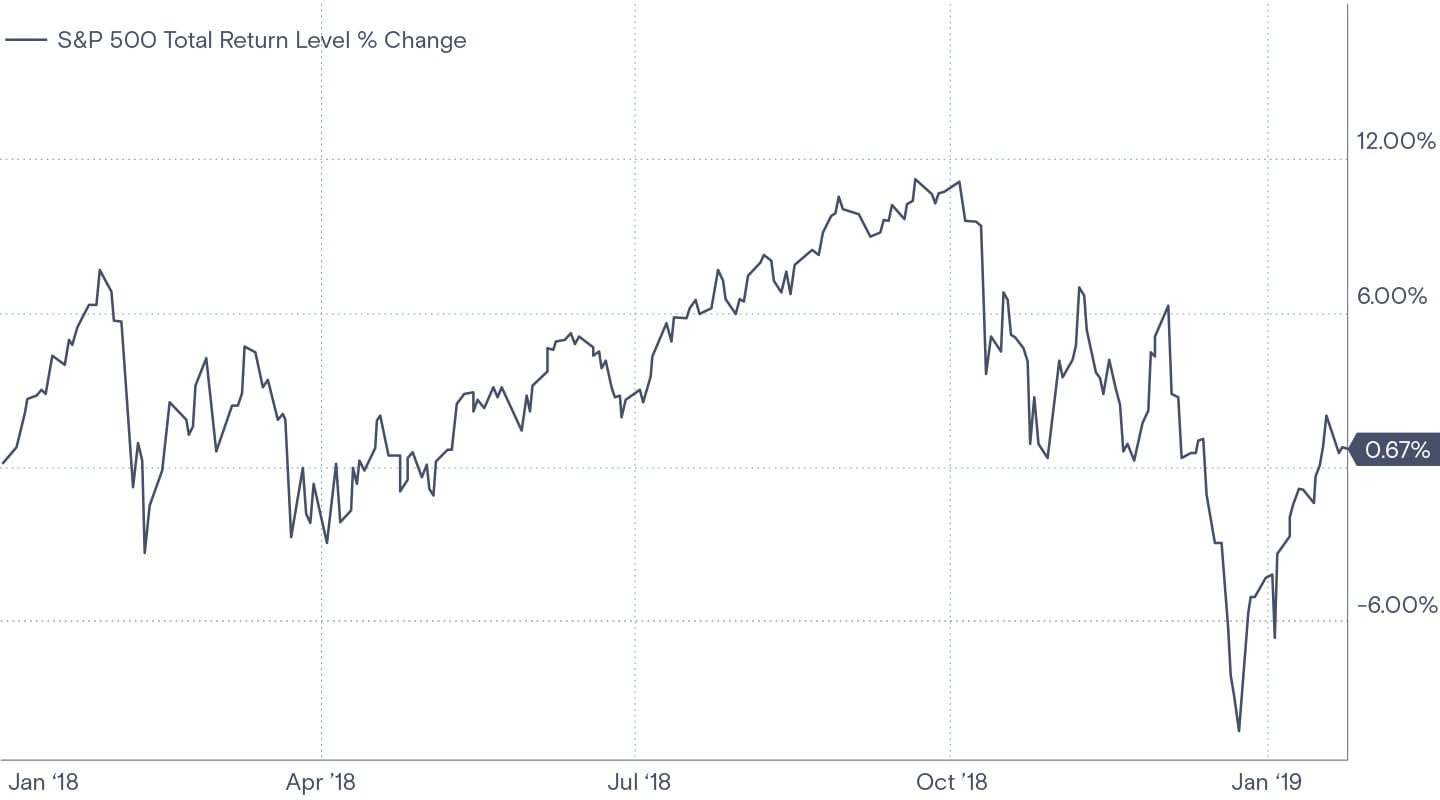 As far as bear markets go, 2018’s swoon was on the small side. It came in just under the technical definition of a bear market and it was just about as short a bear as we’ve seen. Thus, we’re calling the Q3 and Q4 2018 drop a “Bear Cub.” The question on most investors minds is, to extend the metaphor, whether the cub will grow into a grizzly or recede and hibernate.

Regular readers will already know our answer: we don’t know. As we’ve discussed before, it’s exceedingly difficult to predict short-term market movements. Today’s market prices represent our collective best guess as to what’s likely to happen in the future. It’s often said that stock markets typically look 6 to 9 months out. Some investors and analysts digest a vast array of economic data in an attempt to glean insight as to what’s likely to come and, hopefully, profit from their short-term bets.

Despite these exhaustive efforts, successful market timing remains highly elusive. As Nobel laureate Paul Samuelson famously quipped: “The stock market has predicted nine of the last five recessions.”4 We believe they key to long-term success isn’t trying to avoid short-term pain. We counsel resisting the understandable urge to get out of the markets during challenging times. Instead, we prefer maintaining strategic allocations, perhaps even buying more equities during a downturn when stocks are at a relative discount to their earlier highs.

1 MSCI Emerging Markets Index. Past performance is no guarantee of future results.
2 See, e.g., Investopedia.com: “A bear market is a condition in which securities prices fall 20 percent or more from recent highs amid widespread pessimism and negative investor sentiment. Typically, bear markets are associated with declines in an overall market or index like the S&P 500, but individual securities or commodities can be considered to be in a bear market if they experience a decline of 20 percent or more over a sustained period of time – typically two months or more.”
3 Global equities exhibited a similar pattern.
4 See, e.g., Lawrence Summers, Heed the fears of the financial markets, ft.com, January 10, 2016