Mark R. Gordon — JD, MPP, CFP®, CFA
Chief Investment Officer
Last quarter continued the sharp upward trend in stocks that began in late March. Globally, equities rose over 19%.¹ Large US stocks, represented by the S&P 500, rose just over 20%. Foreign stocks also went up over the quarter: about 15% for developed markets and 18% for emerging.² Domestically, growth stocks continued their relatively strong performance versus value stocks, as the latter rose “only” 14%.³ Small stocks, however, reversed their trend and provided substantially higher returns than large stocks, up over 25% for the quarter.⁴ We saw the same pattern (growth over value, small over large) in foreign markets as well.

As you may know, our recommended portfolios typically have a mix of large and small, growth and value, domestic and international. Most clients opening their quarterly statements will see Q2 returns roughly consistent with their respective benchmarks. Looking at the trailing year, however, will likely paint a different picture. For the 12 months ending June 30, clients may see a material difference between their benchmarks and their portfolio returns.⁵

Two related factors account for this divergence. First, over the last year large and growth companies have provided substantially higher returns than small and value companies. Second, a handful of very large companies has come to dominate US market indices after providing eye-popping returns. Today we’ll review why we own value and small stocks, explore why they’ve trailed large and growth, and take a historical look to see what happened the last time equity markets became similarly top-heavy.

Why invest in small stocks? Small, fledgling companies tend to be more volatile than large, established companies. Small businesses typically have higher costs of capital, non-diversified revenue streams, and are more sensitive to changes in the economy. In return for accepting the higher risk of small companies, investors demand a higher expected return. We can see that, as with value stocks, small stocks frequently provide higher returns than larger companies. Since 1928, small stocks have indeed rewarded their shareholders with an extra 3.8% return, annualized.⁷

Large-growth stocks led small-value stocks over the trailing year. There is a big difference, however, between “frequently” and “always.” In a perfect world, value and small stocks would provide higher returns than growth and large stocks each and every year. But they don’t.

In fact, they can’t. If small and value stocks always outperformed large and growth, investors would flock to them, thereby raising share prices and lowering expected returns. It’s the same phenomenon with equities generally: if they always went up, i.e. they have no real risk, then everyone would bid them up and the expected returns would probably be very similar to treasuries. It’s the fact that stocks are risky that makes them long-term wealth builders, in our opinion. Same with small and value.

The first half of 2020 continued a trend we identified at the end of last year: the S&P 500 (the largest 500 companies in the US) has provided higher returns than almost everything else.⁸ Over the previous 10 years, the S&P 500 provided an annualized return of about 14%. Small-value stocks, however, returned “just” under 8%, annualized, for the period.⁹

That’s unusual but not unprecedented. From the charts above, we can see that, for all 10-year periods, value outperformed growth about 80% of the time and small beat large about 75% of the time. Conversely, we’ve seen growth “win” about one in five times and large “win” about one in four times. Before this current trend, we last saw such relative supremacy of the S&P 500 from 1990 to 1999, encompassing the height of the “Tech Bubble.” 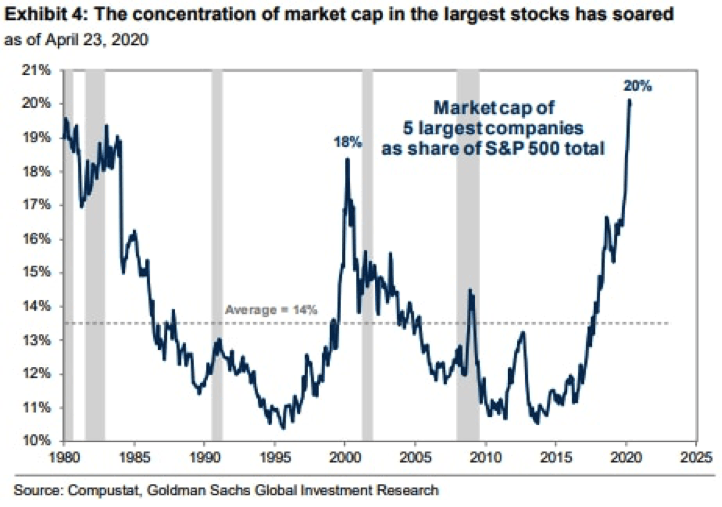 Growing concentration. One major factor contributing to large and growth outperforming is a handful of very large companies at the top. The five largest companies (Microsoft, Apple, Amazon, Facebook, and Google) have accounted for almost three-quarters of the return of the S&P 500 over the last year.¹⁰ This means that S&P 500 investment returns don’t reflect the broader US economy, rather just a few corporate giants.

This is because of how the S&P 500 is constructed. The index weights each company according to its market capitalization. The larger the company, the greater the weight in the index. Thus, as companies grow, they represent a larger percentage of the index. We can see in the chart below the top five companies accounted for 20% of the S&P 500 as of April 2020. Since then the concentration has risen to almost 22%.¹¹

That year the largest US companies were Microsoft, GE, Cisco, Walmart, and ExxonMobil.¹² In those days, we recall, many investors held just a handful of individual stocks, heavily weighted toward the tech sector. It wasn’t uncommon for individual investors to own Microsoft and Cisco and then “diversify” by owning Intel, Dell, and Lucent. For those who didn’t pick individual stocks, many held only an S&P500 index fund.

At the time, seasoned investors and analysts drew a comparison between the top-heavy S&P 500 and the “Nifty Fifty” stocks from a previous generation. The Nifty Fifty were 50 large and popular US stocks in the 1960s and early 1970s. Conventional wisdom then held investors need only own those 50 stocks because they were solid, blue-chip companies and had provided higher returns than the broader market. But the Nifty Fifty materially underperformed the broader market for nearly 10 years, from 1973 to 1982. Since then, the Nifty Fifty had been used as a cautionary tale to help investors diversify.

Late 90s growth investors shrugged off the comparison. They claimed (plausibly) that “this time will be different:” new technology, new economy. Tech companies would change the world and how we invest. Combine tech with a few “old world” companies with competitive advantages (e.g. Walmart or GE) and, the thinking went, one need not diversify more.¹³

The chart below¹⁴ shows the investment returns for the S&P 500, the 5 largest companies in the S&P as of 1999, and an index of small-value companies. We can see that, in 1999, the S&P crushed small-value stocks, rising 21% compared to a 1.5% loss, respectively. Moreover, four of the five individual companies provided much higher returns than the S&P 500:

Unfortunately, the Tech Bubble enthusiasts should have listened to the Nifty Fifty skeptics. Next year began what investors now refer to as “The Lost Decade” for the S&P 500.¹⁶ The index lost over 9% over the next 10 years. Except for ExxonMobil, all the individual stocks lost ground during the 2000s. Small-value stocks, on the other hand, more than doubled during that time, rising a total of over 120%.

In the 20 years since 1999, we can see that diversification did help investors. From 2000 to 2019 only 3 of the 5 big companies provided positive returns. All five trailed the S&P 500. Yet most striking is the difference between the S&P 500 and small-value stocks. Overall, the S&P 500 more than tripled, an annualized return of about 6%. But small-value stocks returned almost 9.5%, annualized, rising more than 6 times their original price.

We don’t know what the next 10 or 20 years will bring. It’s possible the same few companies will provide above-market returns. If so, clients should get their fair share: our portfolios own all the companies in the S&P 500, including Microsoft, Apple, Amazon, Facebook, and Google. We simply decline to overweight any one of them. We want to avoid a “Lost Decade” by keeping our proverbial eggs in different baskets. Thus, if history repeats itself – or even rhymes – clients may be very pleased by holding more broadly diversified portfolios.